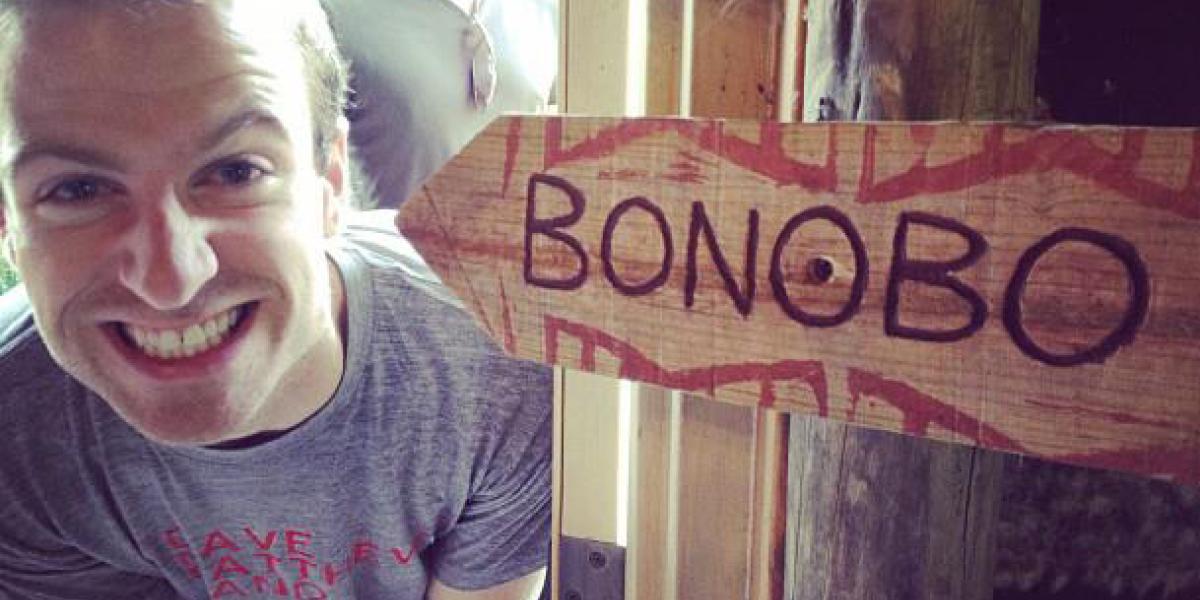 It is often said that graduate school is the most interesting level of education, and this probably becomes even truer when earning a Ph.D. involves exploring a vast forest and getting to follow around animals whose behavior almost mirrors that of humans.  Drew Enigk, a 2012 graduate of Ohio State and the University Honors Program, had the opportunity to spend two months over the summer observing chimpanzees in Uganda's Kibale National Park as he works on earning his Ph.D. from the University of New Mexico.

Drew has countless stories from his trip, and luckily, he recorded detailed summaries of his experience throughout the summer.  This article will give the gist of his journey, along with some of his interesting anecdotes.

After his seven hour flight to Uganda, he met up with some of the people he would be spending the next few months with: Kristen, the other grad student in his program; Melissa, their graduate advisor; and Erik, a grad student from Harvard with whom Drew would be sharing a duplex.  Drew began noticing many cultural differences, such as the Ugandan accent (for example, extra emphasis on "t"), the polite but intrigued looks he got being one of the only white people there, the currency (100 US dollars is equal to 250,000 Ugandan shillings), and taking what he refers to as "arctic showers."

Most mornings, Drew woke up at 5:30 and hiked into the forest with the field assistants, using GPS to find the chimps' nesting site from the previous night.  Early on, Drew noted that it was interesting watching adult male chimps vying for the position of alpha male; he has previously studied bonobos at the Columbus zoo, and female bonobos are the dominant ones.  The team got two close encounters with Lenjo, an adult male who stood right next to them at one point and looked directly at them.

Several chimp encounters Drew had during the first few weeks demonstrated how similar they can be to humans.  One time, Drew's team witness chimps mourning over one of their dead- the decomposing body the FA's had buried recently.  Two adult chimps and two young chimps paused when they reached the burial site, and began exhibiting strange, somewhat fearful behaviors which went on for about ten minutes before they finally left the site.  Drew also observes how humanlike the chimps seemed while they were eating the honey they'd (somewhat painfully) extracted from a beehive.  Apparently, the stinging had been worth it, because they expressed joy and even grunted while eating it- a noise comparable to humans going "mmm" when eating desirable foods.  Another time, as Drew crossed a pond on a log, in a somewhat monkey-like position, to follow a group of chimps, one chimp turned around and stared at him as if he was crazy.

Over the next few weeks, Drew saw many signs of elephants- which can be somewhat dangerous out in the forest but intrigued him nevertheless- yet still did not encounter any (until later when he visited Queen Elizabeth National Park).  He adds, "Note that this is the swamp environment…reminiscent of Dagobah from Star Wars – I always expect to turn the corner and see Yoda's quaint little hut!"  Apparently, the elephant footprints on this terrain are comparable to craters on the moon, and therefore must be avoided while walking.  Elephants also leave streaks of mud on the trees to indicate their presence.  Drew, regretfully, recalls that the small biting ants in the forest- which he nicknamed "green beret ants"- were much better at surprise attacks.

Speaking of surprise attacks, a troop of devious olive baboons raided the group's campsite almost daily, often stealing food or sorting through the compost and spreading garbage everywhere.  One night, the group's neighbor (who studies a different troop of baboons) informed them that the baboons had been having a bit of a party that afternoon, taking the group's clothing to play with and, in exchange, leaving behind feces on the front porch.  They had taken special interest in Drew's flip-flops, and while one was visible in the backyard, it took until the next morning to find the other.  "I found the whole experience laughable, imagining what kinds of games the meddling monkeys might have come up with, had they truly kept one of my flip-flops for the night."

In his summaries, Drew also explains the tradition of empaakos, pet names given by respected elders  in the community that are actually used more often than real names in Uganda.  Toward the end of the trip, the FA's held a ceremony to give empaakos to Erik, Kristin, and Drew.  The results?  "Kristin was given 'akiiki' (ah-KEE-kee), meaning brave one, savior of nations, and also considered to mean traveler by the FAs. Erik received 'apuuli' (ah-PWOO-lee), which is the generic empaako for boys and means doglike and manly. And I was named 'araali' (ah-RAH-lee), meaning: like lightning and thunder. The FAs told me that people sometimes say, 'Sorry araali!' when they hear thunder, in a superstitious effort to avoid being struck by lightning."

In the later weeks of Drew's trip, he began giving presentations to local schoolchildren about the Kanyawara chimps.  He would start out with basic facts about chimps, and then showed photos of some of them along with their names and ages, which the children loved.  He would then discuss snares and other illegal activities that have been harming the chimps.  By sharing stories of the human-like behavior of chimps and bonobos (for instance, bonobos playing "the airplane game," where they lift their children up with their feet and tickle them while they're in this "flying position") and putting names to faces, he hopefully gave the children a sense of respect for the animals so that they won't grow up to be the ones harming wildlife.​

In the final part of his summary, Drew discusses conservation, particularly regarding the snares hunters use that the chimps often end up getting caught in.  This frequently results in loss of limbs, and by extension, the inability for the chimp to ever attain a high status within the community.  Drew explains that rather than trying to eradicate illegal hunting, it is more effective to focus on the problems that lead to illegal hunting, such as the abundance of poor single-parent families, especially those who cannot afford schooling.  These people are most likely to become illegal hunters in an effort to provide for the family; by helping them, the wildlife is also helped.  Field assistant Francis and his wife Easter have started a non-governmental organization in Uganda called Care for Single Parents, or CASP, to help provide an education to children who cannot afford one.  The organization is currently working with about forty single parents and their children to help them become financially independent.  Anyone interested in donating to CASP can contact Drew at drew.enigk@gmail.com.