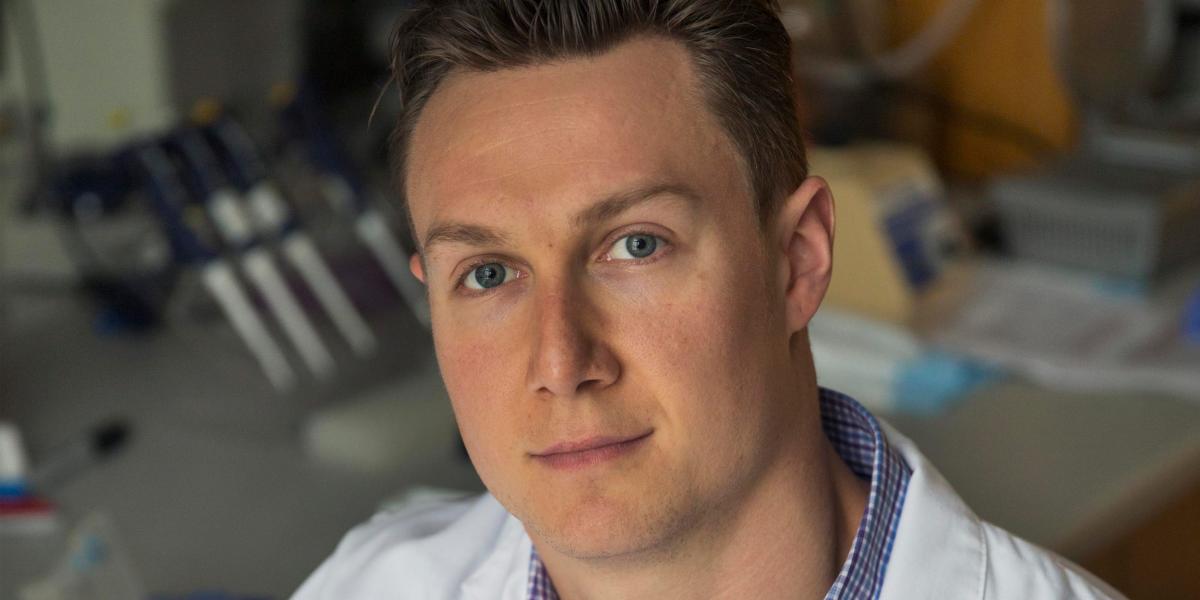 Not long ago, Ollie Glass started out as the typical Ohio State undergraduate student.  He admits to jumping into Mirror Lake for OSU vs. Michigan games- recalling that it was snowing at least one of those times- and rubbing the bust of Thompson for good luck before every exam.  A 2005 Honors graduate, he has accomplished a lot since his first day of freshman year, a day on which he recalls looking forward to the journey to come. Now, he is conducting research at Duke that could prove extremely beneficial to cancer patients.

Glass is originally from Cleveland, but now lives in "the Dirty Durham"- Durham, North Carolina.  In addition to being heavily involved in scientific research, he is also an athlete and has competed in Crossfit for several years.  In 2010 and 2011, he qualified for an international fitness competition, the Crossfit Games.  In fact, he even has sponsorship from a shoe company, Inov-8.  In addition to research and Crossfit training, Glass enjoys spending time with his family.

Glass chose to attend Ohio State for his undergraduate education because it is, as he says, "THE best school in Ohio" and it accommodated his variety of interests.  He was a major in molecular genetics, but was also interested in art history (especially European and Italian Renaissance art), and- true to his name- glassblowing.  "There are very few places where someone can do glassblowing and molecular genetics at the same time," he remarks.  "In order to be a well -rounded individual you need to step outside the norm and your comfort zone."  He certainly exemplifies well-roundedness; though he was pre-med at OSU, he went on to study both art conservation and cancer research after graduation.

While at Ohio State, Glass was a member of the sailing team and Alpha Epsilon Delta.  Despite being interested in various areas, he ultimately chose to major in molecular genetics because "at the time the race to sequence the human genome was being undertaken and a ton of genetic information was emerging like water from a geyser in the ground."  He thought it would be cool to pursue an area in which so much was being discovered and yet plenty remained unknown.  He adds, however, that it is always wise to gain experience in various capacities before deciding for sure where you want to go in life.  "I find it hard to believe that most people just know what they want to do. Without experiencing other opportunities, you limit your abilities and what you know about who you are."

Perhaps Glass's most fateful decision as an undergrad was his decision to get involved in research. "I conducted research on E2F transcription factors and cell cycle regulation with Dr. Gustavo Leone, who is still at OSU.  I ended up completing an honors thesis on an experiment where I deleted transcription factors and tumor suppressors in the mouse placenta, which we utilized as a model for carcinogenesis."  As a result, he received an undergraduate research scholarship and several deans awards.  Not only did his undergraduate research show him that research was something he wanted to further pursue, but it was also how he met the woman who is now his wife.  "We conducted research in adjacent cancer labs at OSU in the Tzagournis medical research facility on the 4th floor, and knew each other from mutual friends," he reminisces.  "I got the courage one day to ask her out. Oddly enough, we lived across from one another on Neil Avenue up in the Victorian village…and the rest is history."

Glass describes the end of his final year at OSU as surreal, claiming that the cliché is true; time truly flies by in college.  However, he was inspired by the obstacles he had overcome as an undergrad, and decided to continue his education at Duke, where he was specifically passionate about breast cancer research.  He notes that grad school is much more research-focused than coursework focused; the goal is to become a better scientist.  "As an undergrad, it's about getting the grades and correctly answering the questions. In grad school, you don't always know the answer.  In fact, you usually don't know the answer. You take an educated guess and test it."  The person with whom he was conducting breast cancer research knew of his involvement with Crossfit and introduced him to Dr. Lee Jones, a Duke professor who was examining the effects of exercise on patients with solid tumors.  This study combined Glass's passion for exercise with his passion for helping cancer patients.

"Specifically, I am investigating the effects of supervised exercise training on breast tumor growth and metastases," he explains.  "There is emerging epidemiological data to suggest that exercise can improve cancer specific mortality, especially in breast cancer."  Glass's goal is to figure out which biological mechanisms are responsible for mediating exercise's effect on breast cancer.  He is studying this effect in both humans and mice.  He hopes that someday, supervised exercise will be incorporated into treatment for cancer patients and survivors.  "I would like to research the effects of exercise combined with targeted therapies for cancer.  Once we find out the targets of exercise, we can rationally combine them with targeted therapies for cancer without added toxicity."

While he has obviously learned a lot from a scientific perspective, his research has also taught him a personal lesson.  "The most interesting thing I have learned during my research is that behind all the test tubes, cell culture dishes, and pipettes is a patient."  Though this may seem obvious to someone unfamiliar with working in a lab, Glass knows perfectly well that it is easy to lose sight of the actual purpose of one's research when overwhelmed by papers, questions, and experiments.  "The scientific world can easily create a smaller world around you, but you have to always remember why you do what you do."  Luckily, he encounters almost constant reminders of why his research is meaningful; he says patients have had very positive experiences with the exercise trials.  Glass insists, "The most rewarding moments occur not from my work alone but the work of our group and the impact that it has on patients."

In the future, Ollie Glass sees himself either becoming a professor at a university pursuing translational research in exercise oncology or working in industry to improve cancer drug efficacy and toxicity.  Either way, his work will undoubtedly prove beneficial to those struggling with cancer.  "Right now," he says, "I am following my passion and interests, and who knows where that leads? As long as you enjoy what you are doing, then the rest will fall into place."