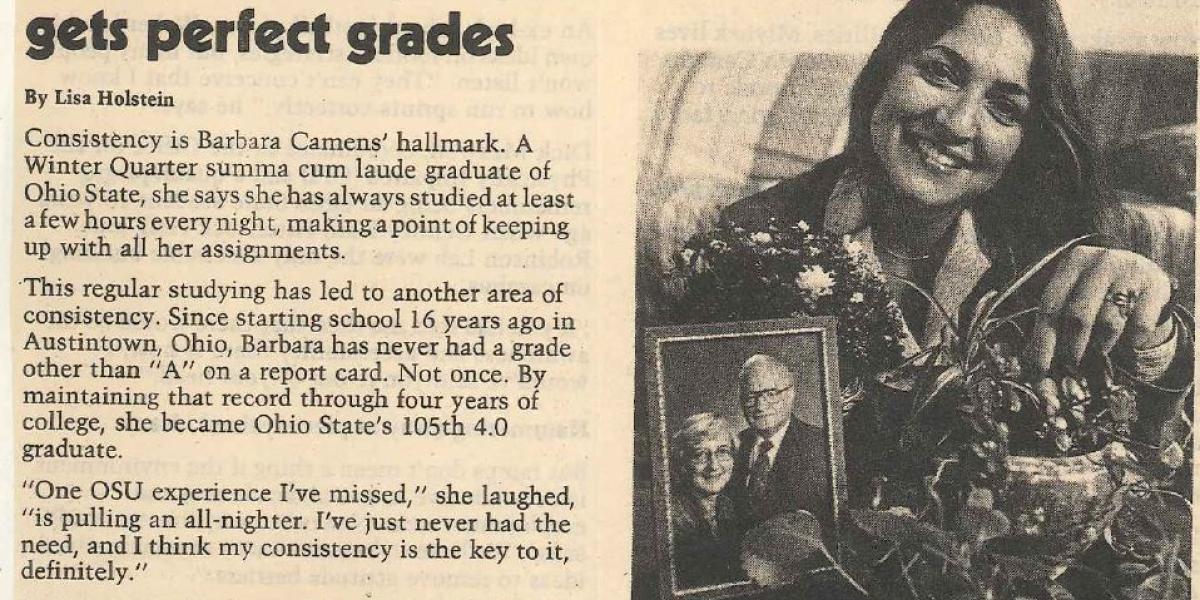 Barbara Camens, like many OSU Honors alumni, exemplifies success in both her professional and personal life.  She calls her interview a "blast from the past," adding that she just visited campus for the first time in thirty years.  It is understandable that she has not had much spare time to return to Columbus; she went straight to the University of Pennsylvania's law school after graduating from Ohio State, and has since been a labor law attorney in Washington, D.C., where she has lived for the past thirty-two years.  Growing up in Youngstown, her father had been part of a steel worker union.  Now, Barbara has made a prosperous career out of helping to ensure the rights of such workers right in our nation's capital.

Camens not only helps to enforce labor laws within the legislative branch and on Capitol Hill, but also serves as general counsel to the newspaper guild, has a congressional appointment, appeared on the Today Show, and wrote a book about women's groups, which was published by Random House.   The list of her accomplishments seems almost endless. Of her professional life, she says, "I've been utterly happy with my career.  It has just been a wonderful experience."​

How did such an impressive success story begin?  Camens, a first generation college student, describes Ohio State as having been an important stepping stone for her profession.  Like many students that attend the university, she chose it because of the countless opportunities and variety of people one will inevitably encounter at such a huge institution.  Though she admits that she personally preferred the small school atmosphere of law school, she praises OSU as "an amazing place with amazing resources," and believes that, above all, it teaches students self-reliance.  "It takes skills to negotiate a campus that big," she reminisces, adding that there is a lot one can get out of the experience.

So what about those students currently at OSU who are hoping to go on to an Ivy League school after graduation?  Camens' story is proof that this is a very attainable goal.  Though she initially worried about her chances of getting into a prestigious law school from a state school, she recalls that it turned out to be no problem.  In fact, she went on to get an award at UPenn for being the top law student.  According to Camens, law school was all about skills such as writing, public speaking, and the ability to think on one's feet.  She believes Ohio State prepared her to handle an intellectual environment and become comfortable with those challenges.  In fact, she creatively describes her experiences at the university to "a tryout for life."

Clearly, the vast resources and opportunities available at OSU played a huge role in this successful attorney's career, but the university has also had an important impact on her personal life. Interestingly, her current best friend is someone she met in Taylor Tower on her first day of freshman year.  Though each had lived in various places over the years, they eventually both ended up in D.C.  Camens' story exemplifies that even the seemingly vast Buckeye community can still be a remarkably small world.